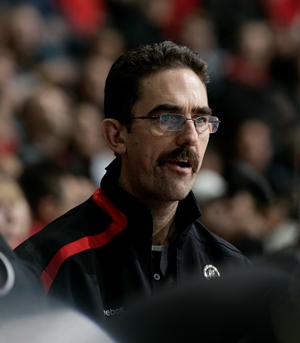 For over 30 years, hundreds of National Hockey League, Olympic Team, Junior and recreational players have trusted Gus Thorson to help them perform at their best.

Gus has been involved in outfitting and serving hockey players around Calgary and around the world.

Gus served the Calgary Flames from 1999 until the end of the 2009-2010 season as Head Equipment Manager. During his career with the Flames, Gus had the opportunity to work the 2003-04 Stanley Cup Finals, and served as the Head Equipment Manager for the Western Conference at the 2008 NHL All Star Game.

Prior to joing the Flames Gus enjoyed a decorated 10-year career with the Canadian National Hockey Team. He began his tenure with the national program in 1989 with the under-18 program while also assisting with the national team under the title of Assistant Trainer. He has attended six World Championships tournaments capturing a Gold medal in 1997, and served as Head Equipment Manager for Team Canada at the 1998 Winter Olympic Games in Nagano, Japan.

He has also spent several years working in junior hockey with the Victoria Cougars, Moose Jaw Warriors and Calgary Wranglers, of the Western Hockey League, and the Calgary Canucks of the Alberta Junior Hockey League.

Gus has worked in the hockey business at various levels. Before joining the Junior ranks he worked as a trainer with the University of Calgary, while earning a Bachelor of Physical Education degree, and was employed in the hockey retail and repair industry.

Although a native of New Brunswick, Gus has called Calgary home since 1970.

Gus and his wife Fran have three children, sons Garrett and Craig and daughter Amy.

How can we help you
be the next one?